History and Cultural Significance of Mullein 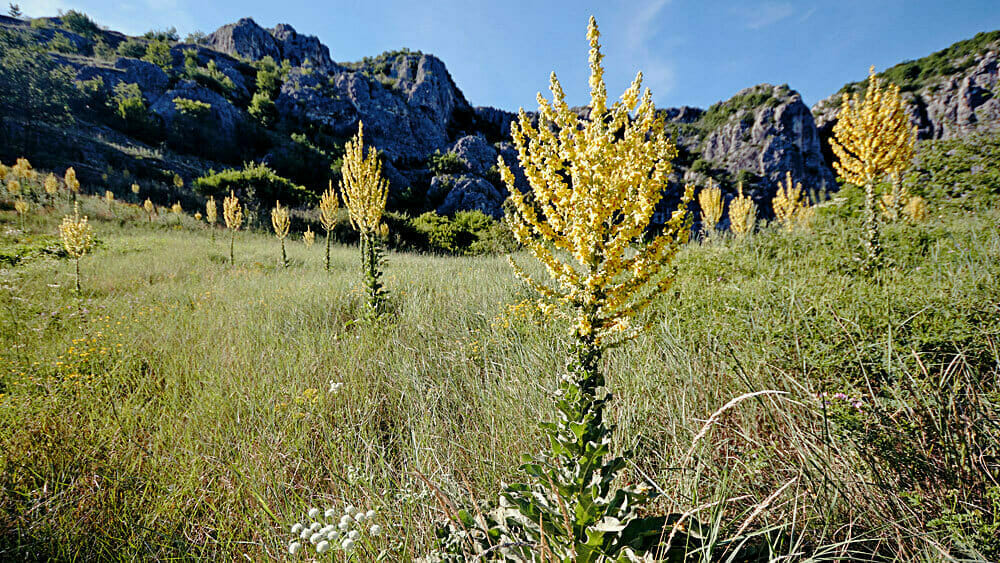 Known scientifically as Verbascum thapsus, mullein is a hairy biennial plant capable of thriving in varied habitats throughout the world. Flavorless, and smooth as silk, mullein has long been a favored component of herbal preparations meant for smoking, including those at MOUNTAIN Smokes.

The etymology of Mullein, from its origin to the word we know today, took an interesting path. It all started with ‘Moldus’ in proto-indo-European language, meaning soft or weak.

The word was adapted to New Latin, as Mollis, used to describe soft, supple, flexible, pliant, tender, weak, and delicate to touch.

From there, we see Old French adopt the word as ‘mol’, and then Anglo-Norman, as “Moleine”, before it made its way to Middle English as “Moleyne”.

Finally, we see the introduction of “mullein” in English, used at the time to describe several Asian and European plants belonging to the genus Verbascum.

Mullein’s Many Names Throughout Time and Culture

In Romeo and Juliet, Shakespeare wrote, “What is in a name, that which we call a rose, by any other name would smell as sweet.”

The same sentiment could be said of Mullein. Going by a multitude of names throughout the years, this plant transcends its common name to embody all the things we love about this plant no matter what it’s called.

In ancient Rome, Mullein was known as ‘Jupiter’s Staff’, a name symbolic of the prevailing religion of the time. As a polytheistic civilization, Romans believed in a myriad of gods and goddesses, one of which was Jupiter, the ‘sky god’ who was believed to oversee all aspects of life and who was thought to have originated from the Greek god Zeus. Jupiter was also thought to protect the Roman state, which makes Jupiter’s Staff an interesting name for Mullein given its purported use in healing and folk medicine throughout the ages.

Mullein presumably earned this name due to its tall, erect, flowering stem, with the stalk resembling a rod of sorts.

There are two cultures from which Mullein earned its name as the ‘Candlewick Plant’. Once upon a time ago, ancient Romans dipped the dried flowering spikes of the Mullein plant in tallow or suet in order to make torches. Later, the Greeks found that the dried leaves of the mullein plant were ideal for use as a lamp wick. Prior to the introduction of cotton as a preferred wick material, mullein reigned supreme.

Mullein has long been a mysterious and mystical plant, favored by herbalists, holistic healers, and yes, presumably, even ‘witches’. There is a long-standing superstition that witches once used (or perhaps still use) mullein for illumination purposes during incantations.

For centuries, Mullein’s use in holistic medicine, and as a folk remedy for humans, is relatively well-known. However, it is the plant’s use with bovine from which it derives the nickname Bullock’s Lungwort. Mullein has a long history of being used by stockmen and cattlemen for the treatment of respiratory diseases in cattle.

Let’s face it. When nature calls, even cowboys stuck in the middle of the desert have to make do with what’s around. If they’re lucky, they’ll have some Mullein to help with cleanup. Although crude to think of, the plant’s velvety soft, hairy leaves were a favorite in lieu of toilet paper when in a pinch.

Other Names of Mullein Include:

Mullein is a notably versatile plant, having been used throughout history in a wide variety of interesting ways by a number of peoples and cultures.

It was the Puritans, in the late 1630s, who first brought mullein seeds to America for use in medicinal gardens. It wasn’t long before mullein spread naturally across the landscape.

Use By Native Americans

Mullein is non-native to North America, thought to have been introduced to America by European settlers. However, it wasn’t long before Native Americans found ways to incorporate this plant into their daily lives.

Application of War Paint – The soft hairy leaves may also have been used to apply war paint used for hunting, gathering, and during times of conflict or battle.

Tea – Native American tribes reportedly brewed tea from Mullein, although the hairs of the leaves may have resulted in a less than appetizing drink.

As previously mentioned, Romans commonly made use of mullein’s long stalks for torches. Not only did the plant’s fibrous composition make for a nice slow even burn, but the stalks were also lighter weight than carrying a solid wood torch, making it ideal for long marches.

Later, the Greeks found that parts of the mullein plant worked quite well as a wick for lanterns.

The Quakers, a Christian group with roots dating back to 1650s England, are part of a movement called the ‘Religious Society of Friends’. This group strives for a plain and modest look that does not highlight or bring attention to physical traits that could be seen as prideful, egotistical, or attention-seeking. Because of this, makeup is largely frowned upon in the Quaker community. However, Mullein leaves have been used as a natural understated way to bring a rosy hue to their cheeks. Sometimes used by Quaker women, mullein leaves are rubbed on their cheeks, resulting in an effect similar to that of rouge.

DISCLAIMER: The following is an accounting of Mullein’s historical use as a therapeutic aid, folk medicine, or remedy among various peoples and cultures throughout history. We do NOT endorse the use of Mullein for these purposes. We make no health claims whatsoever regarding Mullein, and do NOT claim that it is able to diagnose, treat or cure any disease.

Mullein has a lengthy documented track record of use in folk remedies, herbal preparations, and as medicine among Native American tribes. Traditionally, the flowers, leaves, and roots were most commonly used for such purposes.

Pedanius Dioscorides (40-90 AD), was a Greek botanist, pharmacologist, and physician. Hired as a physician by the Roman Army, Dioscorides wrote a famous Greek encyclopedia of herbal medicine used for more than 1,500 years. It was Dioscorides who first recommended the use of Mullein for pulmonary diseases some 2000 years ago.

Mullein Tea – Multiple cultures across the world steeped mullein in a tea to sooth sore throats.

As a Leaf Poultice – It was common for Native Americans to use mullein for a wide range of ailments, including but not limited to abscesses, bruises, sprains, rashes, and burns. To do this, Native Americans crushed and sometimes boiled the leaves of Mullein, grinding it into a paste that could be massaged onto the affected area, or wrapped in a bandage to hold in place.

Smoking Mullein – Mullein’s primary use in folk medicine has been to treat various respiratory concerns, sometimes being mixed with tobacco and smoked to relieve coughs.

Several cultures have hypothesized Mullein’s potential as a treatment for tuberculosis, as well as its expectorant properties, aiding with helping the body expel excess mucus. Cattlemen even used mullein to treat cows, hence its nickname ‘Bullock’s Lungwort’.

Indigenous Mexican Cultures – In Mexico, the Nahuatl and other indigenous cultures have used Mullein for varicose veins, hemorrhoids, and throat irritation or infection.

Mullein has been smoked for centuries by cultures around the world. It is this modality of use that has stood the test of time and is increasingly popular to this day.

Mullein is an often-preferred addition to herbal smoking blends, providing a fluffy, stem-free texture that aids with rolling and creates a consistent volume that burns evenly and slowly. All of which creates a more pleasurable smoking experience. Neutral in taste and aroma, mullein is complementary to virtually any herb, ranging from hemp to tobacco or cannabis.

Long respected for its purported mystical and magical properties, cultures throughout time have incorporated mullein into various religious or superstitious practices.

According to one Greek legend, Ulysses was given a stalk of mullein by the gods to defend himself against the wiles of the enchantress Circe.

Throughout the Middle Ages, the plant was said to possess powers capable of controlling demons.

MOUNTAIN Smokes is proud to include this impressive plant in our blends of smokes. Using organic and sustainable growing practices, only the best Mullein makes it into our smokes, offering a smooth, consistent burn with no added flavors of aroma, perfectly complementing all of our blends.