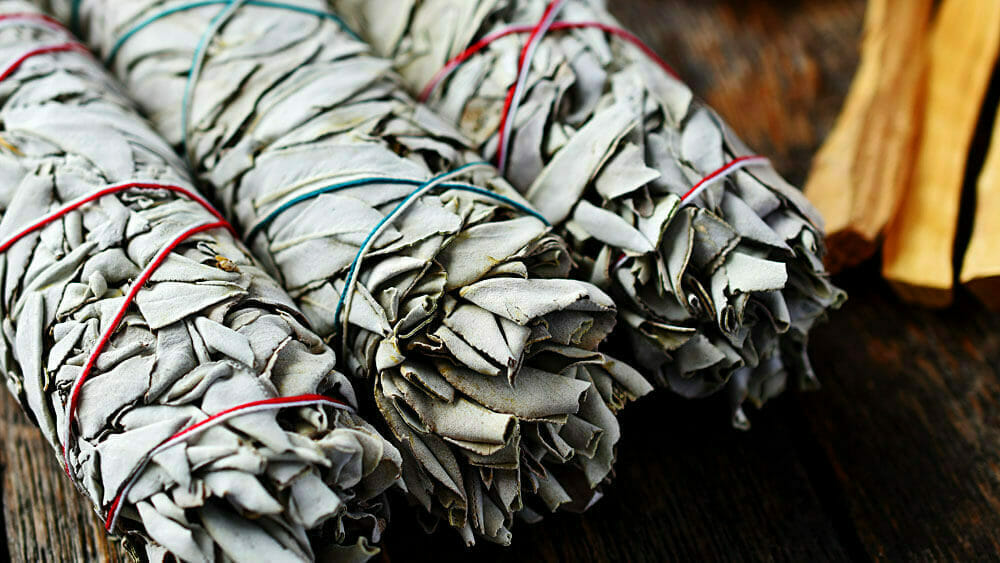 The History of White Sage

Native to the southwestern United States, as well as northwestern Mexico and southern California, this interesting plant has played a big role in ecology, spirituality, and culture throughout history.

In this guide, we explore the deep cultural roots and cultural significance of White Sage.

White Sage’s Use by Indigenous Peoples

Most notably, White Sage was a favored plant of the Native American peoples indigenous to the Pacific coast of the United States.

Referred to as the ‘Tipai-Ipai’, or historically by Diegueno (Spanish), this indigenous tribe reside along the southern border of California in the United States and the northern border of Baja California on the Mexico side.

Comprised of three inter-related groups (Kamia, Tipi and Ipai), it was the San Diego River that formed a natural boundary between the homelands of the Tipai and the Ipai, while the Kamia resided in further eastern desert lands.

The Kumeyaay people mostly lived in dome-shaped dwellings called ‘ewaa, made of branches and covered with tule or willow leaves.

Prior to Westernization, the Kumeyaay were organized into clans or bands referred to as sibs. Each sib was grounded in family lineages with each sib (or shiimull) comprised of between 5 to 15 families.

Also known as Ivilyugaletem, the Cahuilla are a Native American people comprised of several individual tribes of the Cahuilla Nation. Scattered throughout the interior regions of southern California, the tribe’s historical territory spanned some 2400 square miles.

Historically, the Cahuilla have been categorized into Pass/Western, Desert and Mountain groups. In modern times, nine Southern California reservations are federally recognized tribal lands of the Cahuilla people.

A native people of southern and central coastal regions throughout California, the Chumash thrived in part due to benefiting from their proximity to coastal areas and abundant resources and milder temperatures. Translated to ‘seashell people’ or ‘bead maker’, the name Chumash is representative of the lands they inhabited.

Mastering the art of canoe design, these people excelled at fishing, maritime hunting and collecting shellfish.

Use of White Sage By Indigenous Tribes

As a Food Source

*According to the U.S. Department of Agriculture

While the Cahuilla people primarily used White Sage’s seeds, the Chumash people and surrounding communities left virtually no part of the plant to waste. The Chumash ate both the stems and the leaves in various preparations. Similarly, the Luiseno tribe consumed the raw peeled tops of white sage stems early on in its growth cycle.

For Healing and Wellness

Detox: White sage leaves were burned by the Kumeyaay people in sweat houses to detox and purify the body, purported to remove toxins associated with various illnesses.

Fumigation: Burned leaves in confined spaces, such as a hut or home were burned as a type of fumigation to rid the area of pests and pathogens. This was reportedly done in homes where someone was sick with Measles.

The Common Cold and Fevers: Among the Cahuilla and Kumeyaay tribes, when members would catch a cold, white sage was burned and breathed in, with the belief that I would aid with their illness.

Blessing the Hunt: Prior to big hunts, the Luiseno tribe would make large ceremonial hunting fires fueled by foliage from White Sage. It is believed that this was done to bestow a blessing upon the hunt to improve the chances of success.

Among the Cahuilla tribe, it was believed that if a woman tribes member touched any of their hunting tools it would bring bad luck for the hunt. However, applying white sage to these tools would remove the bad luck.

Waving or combing the smoke in fluid motions was thought to encourage its positive effects, whereas blowing the smoke was frowned upon as this would release negative energies from that person into the smoke.

Sparkman, Philip S. 1908 The Culture of the Luiseno Indians. University of California Publications in American Archaeology and Ethnology 8(4):187-234 (p. 199)

Sage is a common herb frequently found in kitchens around the world. Routinely used in dishes ranging from beans and cheeses, to poultry, pork, and sausages. It is also a favored herb for use in game stuffing, such as that used for turkey or pheasant.

In the Western hemisphere, common sage is favored for use in marinades, for flavoring fatty meats, and even makes its way into a few select drinks.

Across Britain, sage is regularly used in sauces and combined with onion for seasoning stuffing. In French cuisine, the herb can be found as a common ingredient in vegetable soups as well as for flavoring meat.

The Germans are known for their use of sage as the dominant flavoring in their English Lincolnshire sausages and in other sausage dishes.

Lastly, in the Middle East and Balkans, sage is the preferred seasoning to use when roasting mutton.

The burning of herbs, botanicals, wood and resins for both purported health and spiritual purposes is a practice dating back thousands of years. It is also one that transcends various cultures and faiths around the world. From Hindu and Buddhist, to Catholic or Pagan, smoke cleansing is a practice that has persisted throughout the ages.

MOUNTAIN Smokes has an incredible respect and admiration for white sage’s cultural significance and its use among indigenous cultures.

We are strong advocates against cultural appropriation of White Sage and ‘Smudging’ (different from smoke cleansing), and work hard to create awareness and educational materials to create a better-informed consumer and practitioner.

Catholics burn incense in a symbolic representation of purification and sanctification.

Taoism, Buddhism and Shinto across Asia employ the use of smoke cleansing in various ceremonies and rites, including paying homage to various deities or shrines, as well as a method of purifying the surroundings.

Across India, use of incense and smoke cleansing has been around since 3,600 BC and persists to this very day where it is used in daily ritual worship, prayers and pujas.

Incense and smoke cleansing is also used in special events within Islam, where it is used as a rite of cleansing and purifying the Ka’aba in Makkah, and to uplift the souls of pilgrims. It is also thought to be an attractive scent for angels.

Contemporary paganism has also adopted smoke cleansing as a representation of the ‘air element’ in rituals, to release natural energy and to purify or cleanse an area or person.

Controversy in Modern Use and Over-harvesting

White Sage is a native Southern California herb that is central to the spiritual practice of local natives. Tribes have used this plant for thousands of years, passing down these beliefs and rituals across the ages. Today, modern descendants of these tribes are finding it increasingly difficult to harvest wild White Sage, and in many cases, places formerly rich with the herb are now barren and the sage has all but vanished.

The modern ‘wellness’ movement has embraced the use (and overuse) of White Sage, and has culturally appropriated the practice of ‘smudging’, resulting in stores from Amazon to Walmart selling the herb on store shelves and online.

In Great Britain, there were ‘sage walks’ believed by some to ward off the looming pandemic and to ward off COVID-19.

Another example, this time from Japan, saw a massive uptick in demand for white sage following the Fukushima nuclear disaster. Residents held on to the belief that it would aid with purification.

The commercialization of white sage has resulted in both illegal and over-harvesting of this natural resource, putting the plant in jeopardy and making it difficult for Native American peoples to participate in their own beliefs and heritage.

Given the unregulated nature of the sage market, poachers across reserves and public land are routinely harvesting hundreds of pounds of this sacred herb at a time. In fact, virtually all sage sold on the open market is ‘wildcrafted’, or in other words, harvested from nature.

White Sage can only be found growing throughout the mountain and plains areas of Southern California, and in bordering areas of Northern Mexico. Given that this herb is found nowhere else in the world, some reserves have become hot zones for illegal harvesting.

It has gotten so bad in some areas that local law enforcement have employed the use of K9 units and even helicopters to spot and arrest poachers.