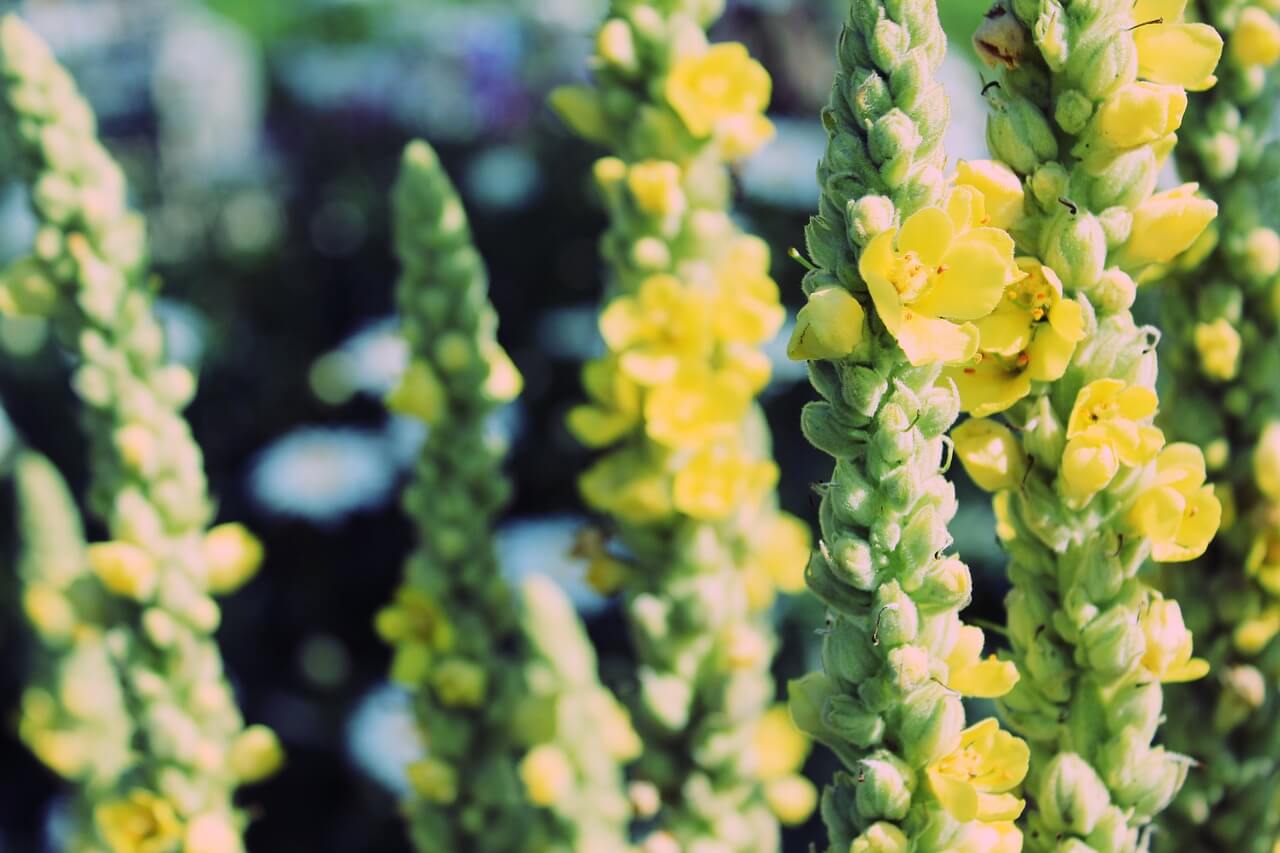 Mullein, known scientifically as Verbascum thapsus (V. thapsus), or ‘common mullein’, is a biennial plant with ancient history. Rooted in holistic folk medicine and found throughout the world, mullein is considered a pervasive and arguably invasive species. Its prolific production of seeds and ability to thrive in a multitude of temperate regions around the world have aided in the plant’s reputation as a ‘weedy’ plant.

Taxonomy of the Mullein Plant

Interestingly, since its first introduction into the literature of botanical study (by Carl Linnaeus in 1753), the plant has undergone several taxonomic revisions.

Mullein is a dicotyledon, also referred to as a dicot, representing one of two categories that all flowering plants are separated into.

Mullein is notable for its small yellow flowers, forming dense groupings along a tall lanky stem that culminates in a dense grouping of flowers. Under ideal growing conditions, the plant can grow to more than 6 feet (or 2 meters) tall.

Each mullein leaf stemming from the stalk grows into a circular arrangement known as a rosette. The leaves of V. thapsus tend to be quite large, ranging up to 19.5 inches long, and on flowering plants alternate along the stem. The shape of the leaves varies between the lower and upper portions of the stalk, including both oblanceolate and oblong shapes. As you progress upwards, each mullein leaf becomes smaller.

The flowers are pentamerous in appearance, featuring five lobes and petals. Known to take up nearly half the length of each stalk-like stem, and the entire plant (but especially the leaves) are covered in dense trichomes that give it a silvery appearance. As for color, flowers can range from reds and purples, to blues and white depending on the species.

The flowers eventually mature, after which they wilt and degrade. The stems and fruits, however, tend to persist throughout the winter months. Once dry, the fruits turn into brown, stiff structures of densely packed dry seeds that propagate the next season of plants.

Where Does Mullein grow

Mullein can be found throughout the majority of North America. In the United States, mullein can be found across all continental (lower 48 states) as well as Hawaii and Alaska. Across Canada, the plant tends to thrive across the southern provinces.

Within the United States, mullein species are often known as a sometimes-bothersome weed found throughout pastures, fields, and along roadsides. A more comprehensive distribution of the species can be found in the United States Department of Agriculture (USDA) Plant Database.

Mullein is also found widely throughout Europe and temperate regions of Asia.

Mullein Plant Habitat: What Conditions Does Mullein Thrive In?

Throughout the USA, mullein is now considered a naturalized or adventive species. Originally introduced to the States some 230 years ago, mullein seeds once were both spread and cultivated by settlers for use in catching fish. During that time period the plant was also widely used by native tribes who likely contributed to the spread of Mullein across America.

As for idea habitat, mullein prefers ‘disturbed’ areas and is not commonly found to persist beyond those borders. According to a 2004 Forest Service’s Eastern Region report, mullein is considered a non-native widespread species typically restricted to disturbed areas and not generally invasive into non-disturbed habitats.

Mullein is often found in areas where there is a canopy opening, and is quite capable of making a home in nearly any type of vegetation or ecological landscape.

The plant has been well documented as thriving in:

The Ecology of Mullein

As a biennial, mullein typically needs to go through a term of winter dormancy before it is able to produce flowers. Activated at lower temperatures, starch degradation is initiated at the root, initiating a period of dormancy preceding the upcoming spring growth season.

As for the seeds, they are capable of successfully germinating in the spring and summer months, generally between 10-40° C (50-104°F), and in nearly bare soil conditions. Studies have demonstrated that seed germination on bare soil is between 4-7 times faster than that where vegetation exists.

The seeds prefer close proximity to the surface, and although they are able to germinate in the absence of light, under ideal conditions in the wild, optimal exposure to light results in a germination success rate nearing 35%.

Under optimal conditions, the plant can flower its first year, although plants found in the northernmost states and Canada may not flower until the second or third year. That said, generally mullein flowers either the first or second year of life, dying towards the end of the second year.

Mullein is reliably crowded out in cultivated areas, with the plant being unable to complete with established vegetation. As such, it is not considered an agricultural weed of significant importance.

However, its persistence in non-agricultural areas where ground cover is sparse can be a challenge to contend with. Situations where mullein may become a nuisance or problem include over-grassed pastures, semi-arid areas such as those in easter Sierra Nevada, and forests that have been eradicated by forest fires.

The origin of many remedies has roots both literal and cultural in homeopathic herbs and plants. Mullein is no different, having been historically used as a purportedly medicinal plant. Although mullein contains a multitude of natural plant compounds with the potential for medicinal investigation, to date, no known drugs have been developed or approved using any mullein-derived compound.

Several potential phytochemicals found in mullein that may be of interest for further research regarding the use for therapeutic aids include:

Uses of Mullein Leaf and Root

The historical use of mullein in folk medicine dates back more than 2000 years, when it was believed useful for the treatment of pulmonary diseases.

First recommended by the famous Greek physician, botanist, and pharmacologist Dioscorides, the plant was originally smoked in an attempt to assist with lung-related ailments. This practice of smoking mullein was also adopted by Native American tribes throughout the United States, as well as throughout ancient Rome and Ireland where it was called ‘Lungwort” and thought to cure lung disease in both livestock and people.

In Africa, the Zuni people prepared the plant in a poultice, using the powdered root for application on skin infections, sores and rashes.

Later, mullein extract made from the flowers was given as a folk remedy for everything from eczema and earaches, to colic and frostbite.

Throughout the years, homeopathic formulations using fresh mullein leaf for ointments have long been used for their alleged anti-inflammatory, analgesic and antiseptic properties. While infusions of the plant were sometimes used to address abdominal and chest complaints ranging from diarrhea to cough.

Again, it is important to note that further research is needed to substantiate any purported benefits of mullein use. We do not make any claim that the addition of mullein leaf will treat or prevent any illness.

Inclusion in the National Formulary

The national formulary is a list of medicines approved for prescription in a given country. Its purpose is to provide key information regarding the description, composition, selection, dispensing, administration and prescription of medicines.

Mullein has had the distinctive honor of being included in the National Formulary of both the United States as well as the United Kingdom.

The use and/or consumption of mullein has been on the rise globally, in both developed and developing countries alike. In the United States, consumers use the dried mullein leaf, flowers, and mullein extract for various wellness purposes (Turker and Camper, 2002).

It is important to note that to date, no FDA approved use of the plant or its compounds has been established for any medical condition or for any type of health concern.

Spiritual and Religious Use of Mullein

Historically, herbalists and spiritualists believed that mullein had both mystical and medicinal powers. It was purported by these herbalists to keep away terrors and evil spirits if kept in the house. In ancient Greece, it was believed that Ulysses consumed this plant to protect himself against the seductive nature of Circe.

Both Romans and Greeks, as well as the indigenous peoples of the Western United States used mullein as a torch or candle during holy ceremonies and funerals.

Herbs, including mullein, are well-known for possessing a diverse range of pharmacological or biochemical properties that may elicit a physiological effect if consumed.

In recent years there has been a resurgence in exploring the pharmacological and biological activities of various plants and herbs.

Why Do We Use Mullein in MOUNTAIN Smokes?

Mullein is known to possess a mostly neutral but subtly-sweet, refreshing herbal taste. Mullein has been used for centuries, both solo and in blends. The herb dramatically enhances and brings out the best flavors, while improving the smoothness of smoked herbs and cannabis.

The addition of mullein enables MOUNTAIN Smokes to deliver a precise amount of CBD in each smoke. Similarly, mullein acts as a valued filler, offering improve smoothness and enhancing flavors while ensuring an even distribution of ingredients in each smoke.

This consistency of CBD, smoothness, aroma and flavor is part of what we pride ourselves on.

Some smokes with CBD simply take too long to burn, taking away from the immediacy of effects that many seek to achieve quickly. The addition of mullein in our smokes enables us to control the burn rate at an optimal speed, enabling consumers to get the full amount of CBD in each smoke quickly and conveniently.