What is White Sage? 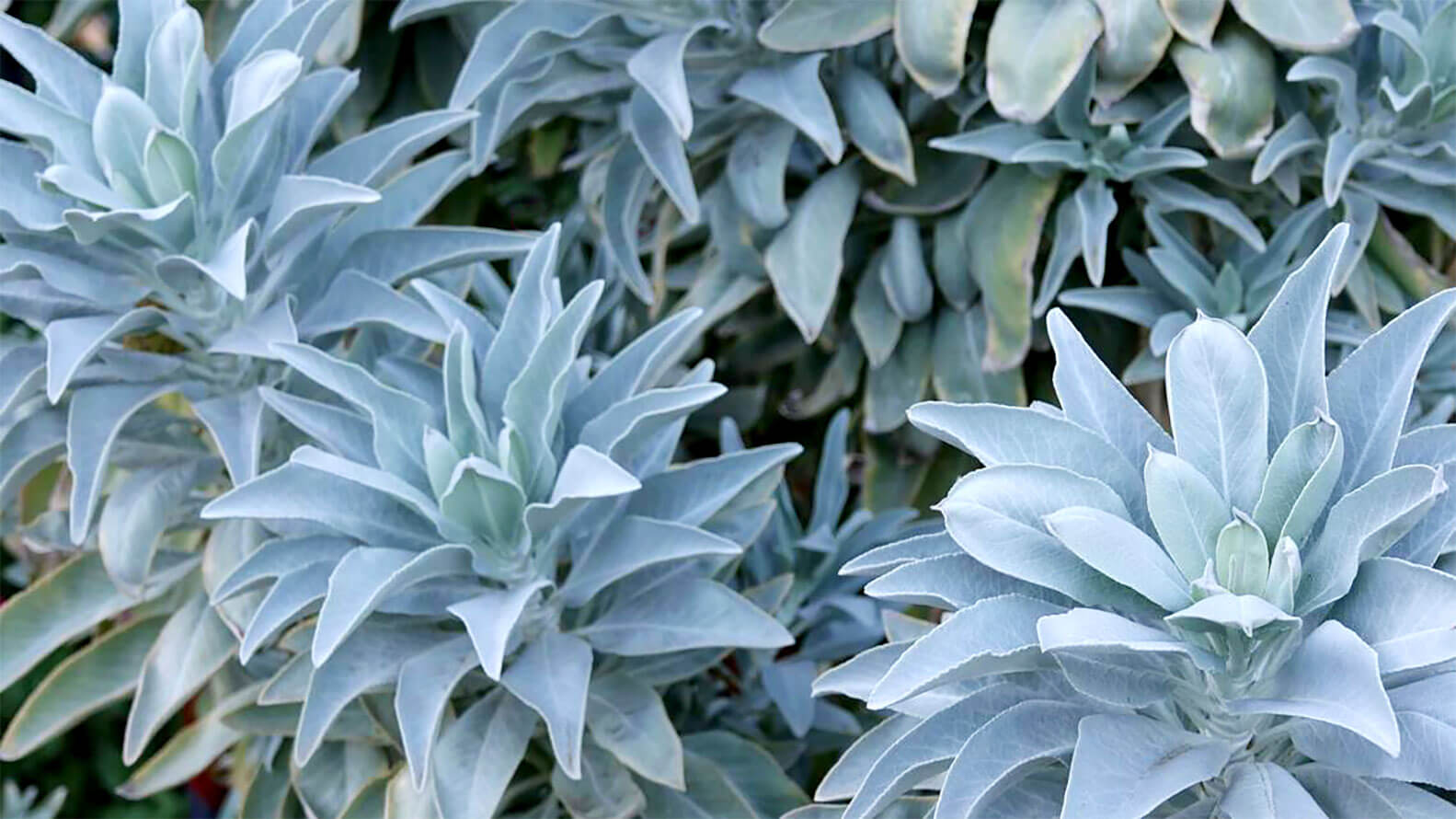 What is White Sage

The southern region of California and the Southwestern United States is home to many species of indigenous plants and medicinal herbs, but few carry as much history and intrigue as does white sage.

Known widely in modern times for its use in smudge sticks and cleansing ceremonies, as well as for its use as a culinary herb and by those who believe the herb holds sacred homeopathic wellness properties.

In this guide, we dive into the key characteristics that define white sage, and unlock a bit of the history behind what makes this herb such a significant addition to Mountain Smokes proprietary CBD Hemp Smoke blend.

What is White Sage?

White Sage, known scientifically as Salvia apiana, is a perennial evergreen shrub native to both northwestern Mexico as well as the southwestern United States.

Other Names for White Sage:

The plant is shrublike in appearance and grows up to 5 feet tall and wide, though the mature flower shoots usually flop over making the shrub appear shorter upon first glance.

White sage is notable for its characteristically pale, grayish-green leaves that reach between 1.2-3.5” long. These leaves appear almost white upon first glance (hence the plant’s name) and often form clusters in an arcing ball several inches across, resembling the shape of a pineapple top.

The opposing leaves with crenulate (notched) margins are smooth to the touch, feature soft hairs, and are a bit larger than those found on many other common varieties of sage.

The flowers are mostly white but can contain a slight hint of lavender or pink and don’t occur in whorls like some of the other sage species common to the southwestern United States. Bees are highly attracted to white sage flowers, and the presence of white sage helps spur pollination of surrounding plant species.

The Taxonomy of White Sage

Where Does White Sage Grow?

The Region, Climate, and Growing Conditions of White Sage

White Sage is native to the southwestern United States and northern Mexico, most notably the southern and Baja regions of California where it thrives among the yellow-pine forests.

White sage prefers dry, well-draining soil, full sun, good air circulation, and can thrive with little water, making it particularly suited to the drought-prone climate of southern California. In the wild, it is most often found on dry, sunny slopes at an elevation no higher than 4,900 ft.

What Are The Differences Between Common and White Sage?

Both white sage and common garden sage are members of the Lamiaceae or mint family, which includes many common aromatic and medicinal herbs.

White sage (Salvia apiana) and common sage or garden sage (Salvia officinalis) are two of over 800 varieties of Salvia within the Lamiaceae family. While both common sage and white sage have a long history of cultural and medicinal use, there are key distinctions between these two plants making each one suited for particular growing conditions and uses.

While white sage is drought tolerant and can thrive in arid climates with little to no water, most varieties of sage prefer a much different growing environment. Common sage is native to the Mediterranean region of Europe and prefers steady watering or regular rainfall to reach its full potential.

Differences in appearance between white sage and garden sage are also quite apparent. Common garden sage features darker, grey/green leaves that are slightly smaller than the smooth, whitish-grey leaves of white sage. Common sage plants also generally only grow to about 2 feet in height vs white sage’s 4 to 5 feet.

Uses of White Sage Throughout History

While both forms of sage have been historically used for medicinal and culinary purposes, it is white sage that is most commonly known for its use as incense, and for cleansing and purifying the air in sacred Native American ceremonies.

White sage is one of the most culturally significant plants in the United States, having been originally used by indigenous Native American peoples along the Pacific coastal regions.

White sage, known as 'pellytaay' to the Kumeyaay people, has a number of traditional culinary uses amongst native American tribes across the southern California area.

The seeds are often toasted, ground up, and used as the main ingredient in pinole, once considered a staple food o the region.

Traditionally, the Cahuilla people harvested vast qualities of the seed, mixing it with wheat flour and sugar to make biscuits and gruel.

The Chumash people and surrounding communities found other uses for the plant, taking advantage of the leaves and stems as a food source.

Historical Use in Health and Wellness

Traditionally, white sage leaves have been used for multiple health and wellness purposes. Several native tribes also used the seed for removing foreign objects from the eye, while Cahuilla women considered White Sage as a herbal remedy to restore strength and promote healing after giving birth.

Historically, white sage has been smoked by the indigenous people of Mexico and the United States as a both a ceremonial and a recreational plant.

Many tribes native to the southwestern United States traditionally burn or “smudge” with white sage as a part of various religious ceremonies. Smudging is most commonly associated with purification ceremonies and is often believed to clear the air of negative energy and purify the body of evil or negative energy. The ritual of burning white sage or “smudging” has been appropriated by the new age movement in modern times, leading to the over-harvesting of wild plants. Thus, smudging by non-native peoples has been a subject of controversy in recent years.

White Sage is on the United Plant Savers “To Watch” List - What Does that Mean?

The explosion of white sage’s popularity within the new age movement has created a trend of over-harvesting of white sage on public lands.

While many consumers see the term “wildcrafted”, and associate it with natural and sustainable harvesting practices, when it comes to white sage, this trend has led to overstressed wild populations of the herb, creating worry amongst native tribes that rely on the use of white sage in their traditional practices.

This practice of over-harvesting has led to the addition of white sage on the United Plant Savers watch list. So, how can you partake in the many benefits of white sage without stressing native populations?

The answer lies in skipping the so-called “wildcrafted” varieties of the herb and instead opting for white sage grown at sustainable, organic farms. At MOUNTAIN Smokes, we only use sage provided by organic farmers to remove pressures on wild sage and to ensure its foothold in nature remains intact for future generations.

Why Do We Use White Sage in MOUNTAIN Smokes?

Given the history and pleasant aroma of burning white sage, it seems like a natural addition to our all-natural premium CBD Hemp Smokes. But it isn’t flavor alone that led to the development of our proprietary blend of organic hemp, white sage, and mullein.

Below we explore just a few of the benefits this miraculous herb has as an addition to our all-natural hemp smokes.

The beautiful resinous aroma of white sage is perfectly suited to pair with the natural flavors of hemp flowers. This leads to a soft, refreshing flavor that will transport you to a place of calm relaxation of body, mind, and soul.

White Sage is a storied plant with a rich cultural, ceremonial and religious history among Native American tribes. We pay homage to this rich history, and aim to preserve the use of white sage as an enhancement to our already impressive lineup of smokes.

Whether for tradition, flavor, heritage or its purported soothing abilities, we feel like you’ll appreciate how white sage can elevate your experience with MOUNTAIN Smokes.

In addition to the beautiful flavor and enhancing qualities of white sage, its use in our proprietary smoke blend helps to ensure a high degree of consistency, delivering a precise amount of CBD in each smoke.

We employ state of the art, third-party testing for all of our products, ensuring that you get exactly what’s on the label and nothing else.

From flavor and freshness, to a smooth pull and perfect blends, we make sure that your experience with MOUNTAIN Smokes is one that you’ll both enjoy and remember for all the right reasons.

White sage, blended with our exquisite and delicious-tasting hemp flower is a match made in MOUNTAIN Smokes heaven.